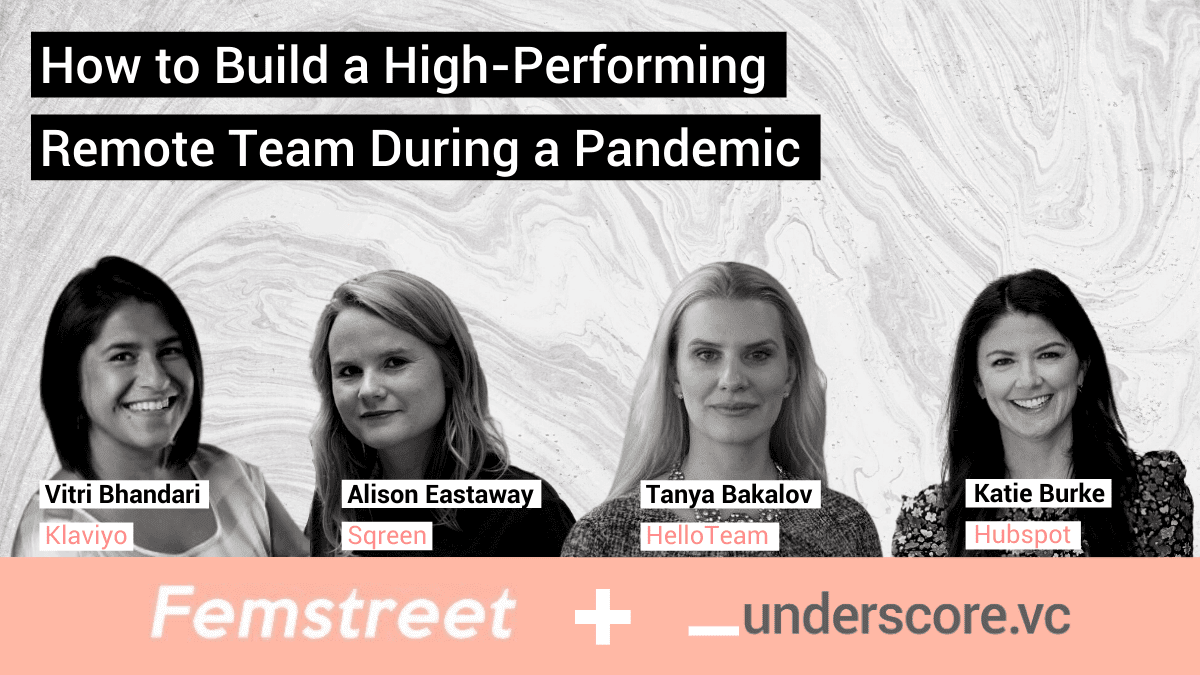 How to Build a High-Performing Remote Team During a Pandemic

For many of us in tech, we’re going 9+ months strong working from home. We miss seeing colleagues in person, there may be distractions galore in a home office, and there’s no clear end in sight. How can leaders keep employees engaged and effective during these challenging times?

To find out, we hosted a discussion in partnership with Femstreet and brought together:

When it comes to keeping your remote team engaged, “there’s no one-size-fits-all solution,” says Katie. But there are several things you can do (for free), that simply take time, intention, and a shift in mindset. We’ve outlined them below, but if you’re looking for further context and insight, we welcome you to watch back the event:

1. Talk About the Hard Things

Katie describes how important it is to normalize discussions about the challenges of pandemic life. “One of the simplest tips is just to talk about your own experience,” she says. “There might be silver linings, but there’s also grief and hardship associated with this year.” Opening up a conversation about the fact that things aren’t perfect all the time can be powerful.

“There’s a good quote, ‘I’m drawn to your vulnerability but repelled by mine,’” says Alison. “That makes for a messy conundrum—who goes first?” Alison opened things up on her team by sharing that she is somewhat of an insomniac. Gradually, the team started disclosing things that had never come up before, “but in a very collaborative way,” she says.

Alison tried two specific tactics to help move this along:

All four leaders agree: you have to hit targets. But all that extra stuff? Not so much.

“There’s this notion that you have to go above and beyond, and be a future leader, and do all these different things,” says Katie. “We’ve tried to normalize the fact that this might not be the year to do it all.”

Vitri frames it as a question: How do you create models that give people the flexibility they need, but also allow your company to hit its targets?

Tanya talks about proactively disengaging her team from work to create space for the rest of their lives. “The pandemic has thrown us all,” she says. “I have two active boys that keep me very busy, and I know what it is to juggle a business and a life. You have to approach everybody with that same level of empathy so people can do what they need to do.”

“So much of culture is what you don’t do,” adds Alison. For a lot of venture-backed startups, the majority of work is knowledge work. “We would say to the team, if your job is knowledge work, that might mean going out for a walk in the morning instead of doing emails,” she says. This work needed to be reframed: “That’s not a break—that’s how you get to the decision.”

As you rethink productivity for your remote team, some balls will have to drop. Katie describes a memo about HubSpot’s 2020 vision. “It’s become a bit of a joke,” she says. “We can’t be diligent about it, because we’re not doing anything listed anymore.” Instead, they created a new one called What Happens When Everything Falls Apart.

With this new memo, they:

Vitri has made it clear to her team that “sustained long hours are not okay.” It’s one thing to have a big deadline. “But if it’s more sustained than that, then we probably have the wrong model in place,” she says.

Klaviyo tried a few different experiments to clarify priorities. One week, they could each only attend a maximum of six internal meetings. “You could pick only what made sense,” she says. “For ones that didn’t make sense, did something need to shift?”

They found clarity by proactively communicating and asking:

If the answer was no, they’d drop it as a priority.

“Times of crisis are when you see if your culture holds up,” Tanya points out. Instead of getting into the weeds of what your team is going to do each day, she suggests stepping back and seeing the big picture of your strategy.

Remind your team of your Vision, Mission, and Culture.

“Our core values aren’t changing just because we’re remote now,” she says. “If we believe in collaboration, innovation, customer success, and teamwork, then that’s who we are.” If you have a strong company culture, it will continue to guide team members and keep them engaged—even during stressful times.

At the end of the day, “we’re one big team,” says Vitri. Once Klaviyo realized remote working would be a longer-term thing, they shifted their focus to: How do we take care of each other as people?

That started with actively reaching out to team members one-on-one. “We wanted to have those conversations and hear firsthand how it was going,” she says. “It’s about being open and vulnerable as a leadership team.”

She shares an example of a crazy busy day in March. “I was home with my daughters,” says Vitri. “And at one point in the middle of a review calibration, my younger daughter threw up. And I just said, ‘You know what? I’m sorry, but we’re gonna have to reschedule.’ And that was that.”

Her team picked her up, filled in, and made the necessary changes. “It was awesome,” says Vitri. 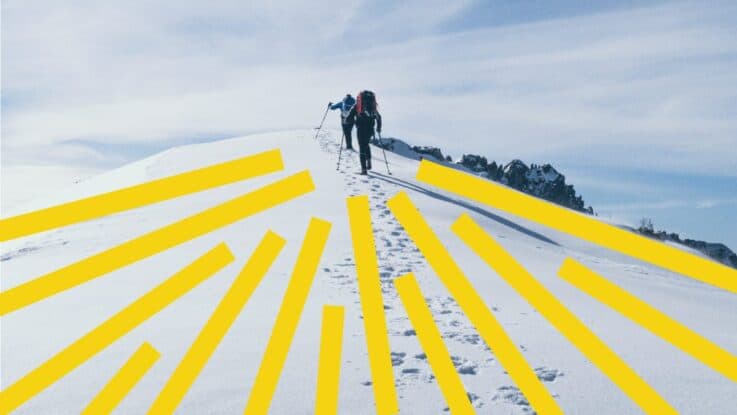 There are No Shortcuts: 5 Hard-Won Lessons from Zenefits CEO Jay Fulcher