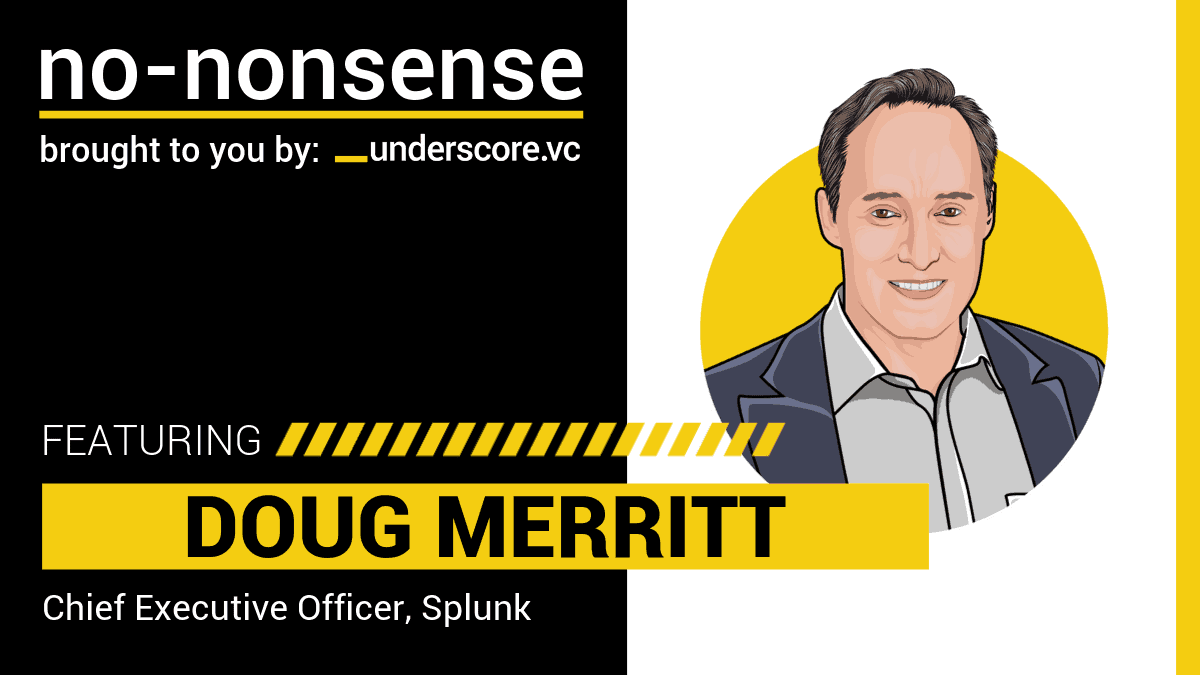 Following the 2019 Core Summit, we’re releasing “No-Nonsense,” a content series featuring no-nonsense advice on the not so obvious paths to success. Check back every Wednesday for the release of each interview with our 2019 Core Summit speakers!

This interview is with Doug Merritt, President & CEO of Splunk, the data-to-everything platform aiming to bring data to every question, every decision, and every action across organizations. Under Doug’s leadership, Splunk has been internationally recognized and lauded. In 2019 alone, Splunk was recognized by Fortune as one of the 100 Best Workplaces for Millennials, and LinkedIn named Splunk to their list of businesses where U.S. workers most want to work.

With decades of leadership and executive experience, Doug has helped grow multiple companies and led large-scale business transformations. Underneath that, however, is a sports lover and a dedicated family man. He prioritizes taking his kids to school a few times a week and is home in time for family dinner most nights.

In this interview, we get Doug’s thoughts on scaling companies, the future of machine learning, the importance of data, and so much more. We also sat down with him and Marilyn Matz, Co-founder & CEO of Paradigm4, for a fireside chat at Core Summit 2019 – You can watch that full chat below!

What is Splunk’s North Star?

Splunk’s North Star is the belief that we can and should be part of every major solution in the world around us. We aim to do that by in some way touching or accessing the vast majority of the world’s business data for organizations.

This boils down to our core belief that every problem out there ultimately can be turned into a solution with data.

Do you have a mantra that drives your company?

The truth is that, for most of us, data is hard.  Genetically, we are “story processors,” not “logic or data processors.”  As a result, many people shy away from data. At Splunk, our belief is that the only way you’re going to actually improve the world, and our species is to lean into data, so it needs to be easier to do that. After all, it’s almost a non-human orientation to go that extra step to look at data versus listening and latching onto an interesting story.

How do you maintain a culture of entrepreneurship in a growth company?

I think it starts with the amazing company I inherited.

The cultural ethos in the company stems from a word that people have used internally since before I got here — that we are a “do-ocracy,” meaning that if you see something that needs doing, you can, and should, pick it up and do it.

The whole point of our products and solutions — and our culture — is to be curious and ask any question you want through Splunk. Because of that, you end up with a very curious, eager-to-learn organization. That backbone was and is essential.

As for my role, I try to amp that up four-fold.

Much of what we have done is around instilling a growth mindset and an overall abundance orientation. After all, if the universe is expanding at an expanding rate, then that same growth and abundance is all around us in our daily lives.  We all have a choice to be an abundance person or a scarcity person, to be a growth person or fixed-outcome person.

Over the years, what has become a non-negotiable for you in business?

I don’t have too many, because growth and diversity are so important to me. But one of my non-negotiables is passive-aggressive behavior. I just have less and less patience for it.

Another is that I strongly believe that you must speak up if you feel, believe, or see something. The victim mentality and feeling of helplessness or non-empowerment is something that I have trouble tolerating. There is so much that can be done if we are willing to identify our problems, put them on the table, and discuss them openly. It’s our responsibility to do that. Nobody else is going to do it for us.

''There is so much that can be done if we are willing to identify our problems, put them on the table, and discuss them openly. It’s our responsibility to do that. Nobody else is going to do it for us.'' - @douglasmerritt Click To Tweet

What business advice would you put on a billboard?

“You’re either growing or you’re dying” is the line I use most often. Status quo and homeostasis are fictitious representations, so on my billboard, it’d say, “Your job is to drive change.”

How do you make it so that people don’t just tell a story, but they include data in that story and its development?

When people think of data, they usually see it in an abstract sense. We want to make data more accessible and tangible, as well as fun, so people can understand the stories it can tell and, in turn, use data to tell stories.

We’re working to lower the bar so anyone can play with data. We’re doing this in a multitude of ways; by integrating natural language interfaces so that you can verbally dig through data. We bake machine learning into everything.  And we’ve recently launched a next-generation mobile environment as well as augmented reality and virtual reality capabilities.  We want users to be able to naturally weave data into their immediate environments in ways they can relate to.

You’ve been quoted as saying that data is the key to driving shared prosperity. Can you give an example of where it has been game-changing for others?

Early in my life, I saw a pattern of prosperity and advancement being correlated to the free flow of information and education. One of the reasons I fell in love with data is that it can be the solution to more problems than we give it credit for. I truly think that sharing data creates much more prosperity for humanity, globally.

''One of the reasons I fell in love with data is that it can be the solution to more problems than we give it credit for. I truly think that sharing data creates much more prosperity for humanity, globally.'' - @douglasmerritt Click To Tweet

One example I’ve seen is at a not-for-profit that we’ve been supporting that is trying to shed light on human trafficking, the Global Emancipation Network (GEN). The data that could shed light on the identification of the victims and perpetrators is scattered across thousands of systems in no consistent format or structure. GEN took up the challenge of figuring out a way to get access to that data.

The Global Emancipation Network, drew together police data, border data, NGO data, and many other data sets. All said and done, they are now able to pinpoint increasing volumes of victims and perpetrators in an effort to remedy trafficking.

That is one of the thousands of examples I’ve seen where data has enabled breakthrough insights and solutions to extremely vexing issues.

You’re managing Splunk through a billion-dollar repositioning. How do you do that, both on a fundamental and a human, cultural level?

It’s not easy. We’ve had to scale and maintain culture while keeping and consistently delivering high growth expectations. The balancing act was how to continue to meet our growth metrics while tackling a series of deeply foundational transformations.  I know it’s an overused expression, but this really has been an act of rebuilding huge portions of a plane while it’s in flight.

Luckily, one of our cultural tenets is that Splunk is a “do-ocracy.”  Everyone is encouraged and empowered to jump in, identify hard problems and become part of a team solving them. This element of our culture creates the belief within Splunk that our one-year ambitions and deliveries are what would be typically seen in a three or four-year time period at other companies.

Fortunately, I think that people, inside and outside the organization, are energized by the vision that we have as well as our strong grounding in purpose; we actually plan to turn data into doing and through that, be part of the many needed global solutions. When people stop and look back, I think they’re really proud of the progress we’ve made.

If you were advising other CEOs and emerging leaders, what would you tell them to do differently?

When I look back at my first year as CEO, it took me nine months to get enough internal courage to actually begin to put my beliefs into action. I made some easy moves, but it really took me a while to realize that what I believed was worth doing and that whatever risks I was going to face were not nearly as bad as not “leaning in” and driving change. You rarely regret moving fast, but you almost always regret dragging your feet.

''You rarely regret moving too fast, but you almost always regret dragging your feet.'' - @douglasmerritt, CEO of @Splunk Click To Tweet

How does AI, ML, or deep learning become a positive force for good?

If I look back over the past 10,000 years, every major innovation was thought to have the risks of either ending humanity or driving significant damage. Yet, somehow, we’ve pivoted through every single one of those, from gunpowder to steam engines to nuclear power. Occasionally, people have used these discoveries for negative purposes, but 98% of the applications are to solve problems and move us forward.

Is there chance for some meaningfully negative uses of AI?, absolutely.  But the vast majority of the time, we will see ML and deep learning providing massive value.  Like everything else in life, you can’t get the benefits without the risks.  And the benefits will be so monumental, that stopping any further development in ML and AI (even if we could) would be a travesty for all of us. 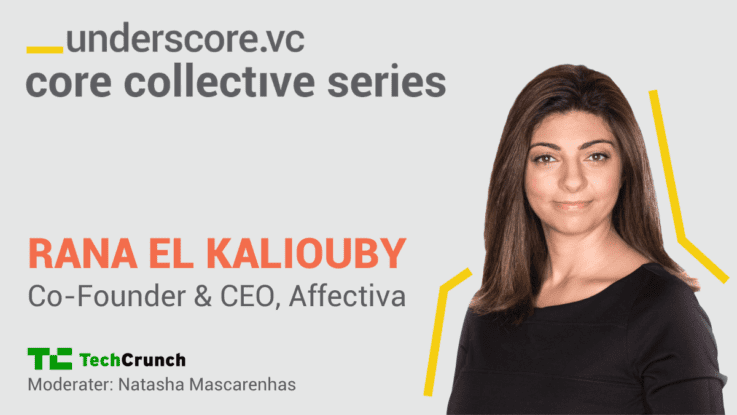 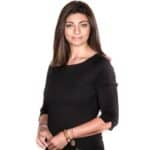