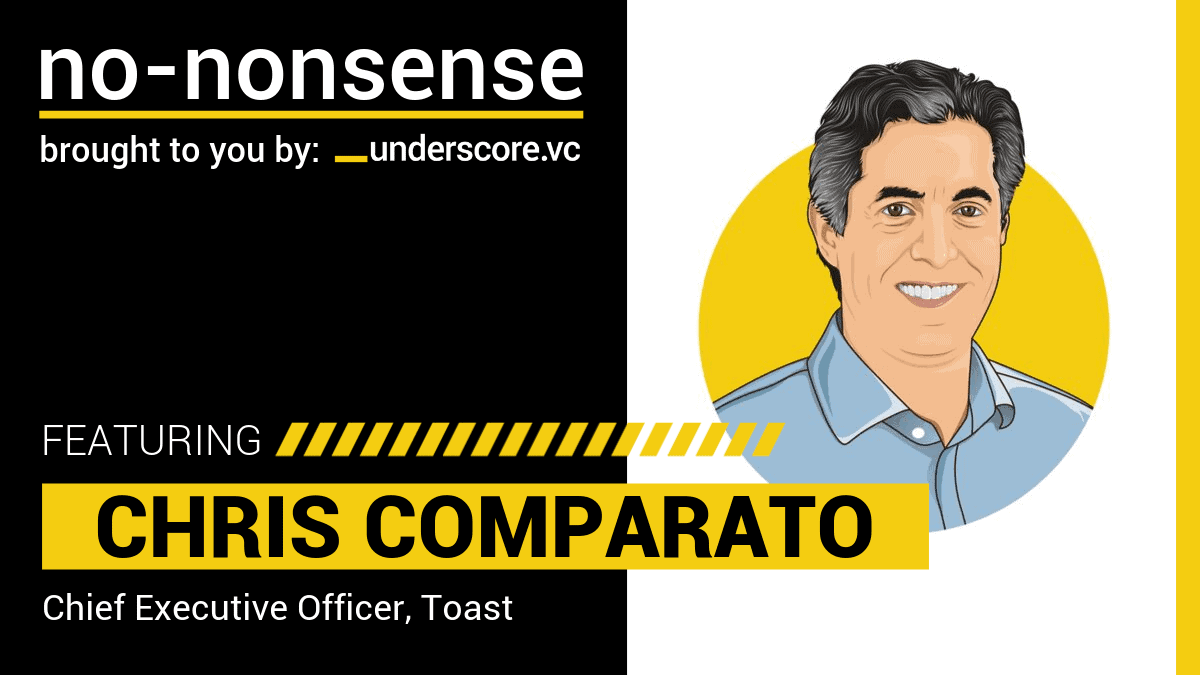 Following the 2019 Core Summit, we’re releasing “No-Nonsense,” a content series featuring no-nonsense advice on the not so obvious paths to success. Check back every Wednesday for the release of each interview with our 2019 Core Summit speakers! First up: Chris Comparato.

To kick this series off, we spoke with SaaS enthusiast Chris Comparato. Chris is the CEO of Toast, a Boston-based restaurant technology company growing its customer and employee base at a nationally recognized rate – they were declared a “Unicorn’ with their 115M Series D raise, and recently near doubled their valuation after raising an additional $250 million in April (we like to imagine they celebrated with unicorn toast).

However, that growth doesn’t crowd Chris’ focus on his employees. Every quarter, Chris personally hands out Toastie awards to his top-performing employees and had the company’s conference rooms appropriately named after various breads and toasts.

Chris has extensive experience in growing SaaS companies, including tenure at Acquia and Endeca. We chatted with Chris about the Boston startup ecosystem, how he levels culture fit in hiring, and what’s keeping him up at night. You can also catch his Core Summit lightning talk in the video below!

At Toast, what is your company’s North Star?

Our purpose statement is to enrich the food experience for all. Our mission is to empower the restaurant community to delight their guests, do what they love, and thrive. That’s been our North Star for years, and it drives everything that we do.

Running a restaurant is not easy. Consumer expectations are widely changing, due to factors like mobility, convenience, and diets, so we want to empower restaurants to meet these expectations and delight their guests.

We also want to help employees, managers, owners, and operators to do what they love, which is to create a fantastic guest experience rather than getting bogged down in administrative and technology problems.

Lastly, we want to be our customers’ trusted technology partner to help them thrive. The restaurant industry is going through a massive transformation, and to survive it, you need a partner that can look around corners and predict where it’s going next.

Is there a specific mantra that you use to help drive your company forward towards this North Star?

Years ago, we codified our core values, so those resemble what you could say is our mantra. We call it our RECIPE.

Look at “do right by the customer” – you’ve got to really be obsessed with your customers. As for “play and win as a team,” Toasters [a nickname for Toast employees] love to better this restaurant community together, and for “make an impact,” we want everything that we do to have a super positive impact on the restaurant community. That drives how we prioritize features and what we work on.

What do you think is the most important thing for you as CEO in setting your culture?

Culture has to be watered and fed. You don’t just put up core values and say, “Here are the core values. Now behave.” For us, culture is like a vibrant, living, operating system that you have to pay very close attention to.

Culture has to be watered and fed. You don't just put up core values and say, ''Here are the core values. Now behave.'' - @ChrisComparato Click To Tweet

I aim to lead by example, so I care a lot about our culture. It’s one thing to say, “Hey, we’re obsessed with customers,” and then to not handle customer situations yourself. It’s one thing to say, “Hey, we believe in no ego,” but then all of a sudden walk around with a chip on your shoulder.  For me, you need to be a part of it, live it, breathe it, and keep an eye on it, because otherwise, it could get away from you.

As you think about hiring, what is the role of hiring for culture fit? How do you ensure you welcome diversity but still have that common thread of culture?

Toast is not just a software company. We’re also a hardware, payments, fintech, workforce management, and supply chain company. It’s probably the most complex workforce that I’ve helped lead, and we try to make sure that across all of those spectrums, people are tied together.

To speak to that, we’ve moved the culture fit piece of the interview upfront, because the last thing you want to do is go through four rounds of an interview, have the last element be a culture interview, and realize, “Okay, this person was never a fit.”

Number two, we try to diversify all the elements of where we hire people. Certainly, some amount of restaurant or hospitality experience is a plus to us, but we counter that with people who maybe haven’t worked in a restaurant and show up with fresh ideas to help us think out of the box.

How has the Boston ecosystem contributed to Toast’s success and evolution?

The Boston ecosystem is getting better and better. Right now, I look at Boston and I am super excited about the diversity of companies that are popping up – no different than where we were six or seven years ago.

Boston has a base of entrepreneurs and innovation that has spawned some super interesting companies. People have had successes and then launched their next acts, whether it’s from a company like HubSpot or Endeca, where a few members of Toast leadership came from. I think Boston has a pretty good hop in its step on innovation, growing talent, and having talent be bold enough to go, “Hey, I’m going to go try something.”

I think Boston has a pretty good hop in its step on innovation, growing talent, and having talent be bold enough to go, ''Hey, I'm going to go try something.'' - @ChrisComparato Click To Tweet

Is there anything you think the Boston ecosystem needs more of that would help businesses scale?

Having some more regular peer connections and groups could help foster even more confidence to scale great companies. I’m part of a CEO peer group that is comprised of mostly West Coast companies that have scaled to significant levels, and sometimes I step back and wonder, “Okay, why don’t we have this within Boston?”

I think there’s some work that we could do in Boston specifically to build more forums and peer groups. Certainly, groups like MassTLC and the Underscore Core community try to help it, but I think there’s something to be said about whether we are openly sharing enough, transparent enough, and getting together to talk about what it’s like to scale a company reasonably fast.

How would you describe Toast – in terms of customers, employees, or geographic footprints?

I always tell the team we’re still in “inning one” of what will be a long ball game to get into each and every restaurant across the U.S.. Over the course of the next five years, we will be a multi-billion-dollar company in revenue and impacting many aspects of the restaurant and food ecosystem.

We’re over 2,000 employees – which is crazy because we were at 65 when I started in early 2015. We’re growing north of 100 percent year-over-year on the unit economics of recurring revenue and other key aspects of growth. Margins are getting better as we scale, and usually, most companies tend to tail off and not execute as well as they scale.

In the early days of your career, or your time as Toast’s CEO, what are the things that you found yourself wasting time on most that you would advise other startup CEOs to avoid?

As you scale, it attracts more eyeballs, and those eyeballs source as inbounds (“Hey, I have a friend,” or, “Hey, you guys are doing great. Can we meet for coffee?”). In many ways, these inbounds (typically vendors) often act like pebbles that clog your inbox, and to be super-efficient, you need to eliminate those interruptions.

I also think you cannot spend enough time on human capital management. At Toast, it can feel like a new company every six months. We tell new employees, “you’ve got to be used to change.” What I tell people and leaders coming into Toast is if you think we’ve got it all figured out, you may not do well here, because we’re constantly adapting to the next level of scale.

What I tell people and leaders coming into Toast is if you think we've got it all figured out, you may not do well here, because we're constantly adapting to the next level of scale. - @ChrisComparato Click To Tweet

The other lesson learned is that you can’t expect to be in the know on every aspect when you’re scaling this fast. This means putting leaders around you that have a growth mindset and can adapt to scale, coupled with what I would call a strong company operating system to hold everything together.

What is the best piece of advice you’ve ever received, and who did it come from?

It’s been a melting pot of advice, but I think the best comes back to building teams and putting the right people around you. Be intensely focused on the right team, whether it’s as CEO, manager, or director.

For this advice, I’d give credit to Steve Papa. Steve was my CEO at Endeca and our Series A investor in Toast. The conversations that Steve and I get into are laser-focused on team dynamics and player management. We often talk about who’s involved, who’s in the right box, who’s complementing who and who we’re missing.

Lastly, what is keeping you up at night?

It’s probably people and execution. In my first two and a half years at Toast, I was on every interview panel. When we hit a few hundred, I realized it wasn’t scalable to interview everybody. So now, what keeps me up at night is making sure that the Toasters coming in are absolutely the best fit for the mission ahead, because when you’re in front of an orientation class of 100 people, you’ve got to trust that your team held as high a bar as you held. You’ve got to put a lot of trust that these hundred new Toasters are the absolute best in their game.

I think that will always keep me up at night, because no matter what level of scale, hiring that next great person is a bar that has to be held really high. 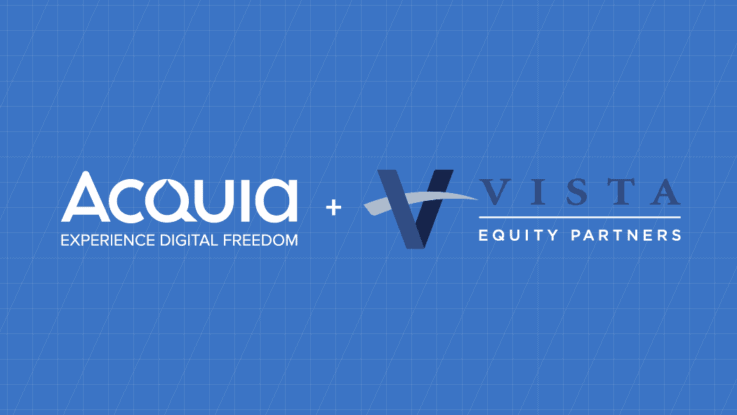 Would You Take a Billion Dollar Buyout?