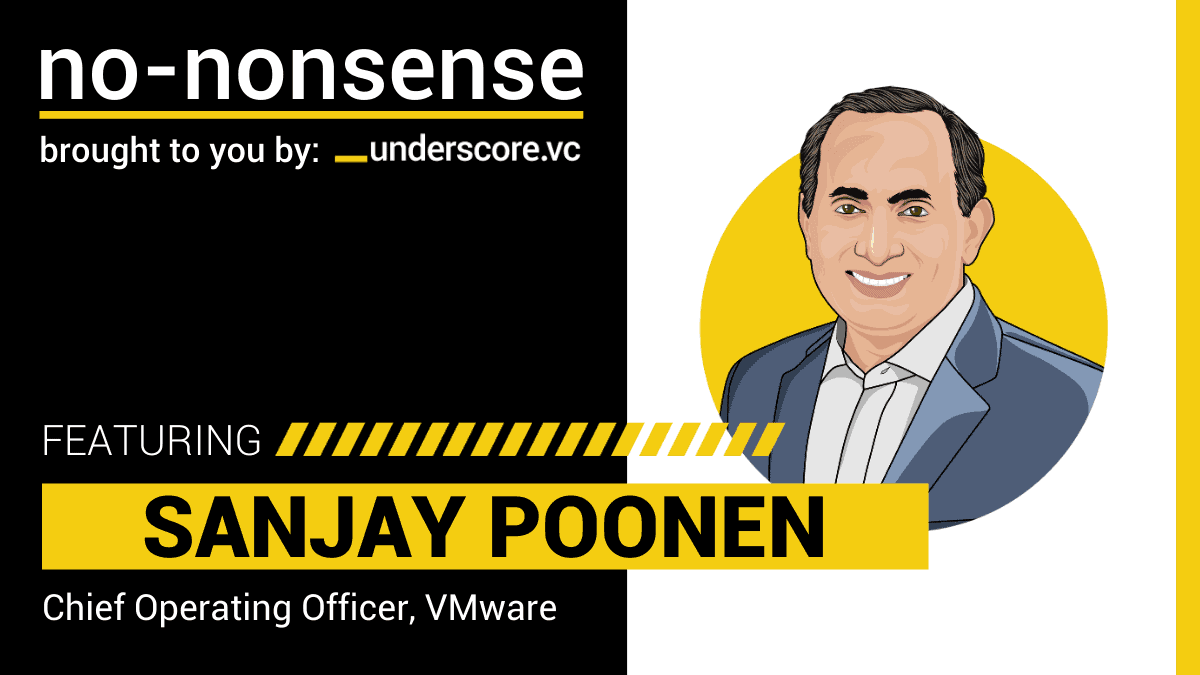 Following the 2019 Core Summit, we’re releasing “No-Nonsense,” a content series featuring no-nonsense advice on the not so obvious paths to success. Check back every Wednesday for the release of each interview with our 2019 Core Summit speakers! This week we’re talking to Sanjay Poonen.

For this installment, we spoke with Sanjay Poonen, the COO of VMware since 2013. At VMware, Sanjay is responsible for worldwide sales, services, alliances, marketing, and communications. Previously, Sanjay worked in an executive role at SAP, Symantec, VERITAS, and Informatica having started his career with tenures at Microsoft and Apple. When he’s not helping tech companies scale, Sanjay’s probably spending time with his family or playing the piano, which he’s quite good at!

Sanjay Poonen has come a long way since arriving at Logan Airport with 50 dollars in his pocket at the ripe age of 18. Today he’s leading growth, acquisitions, and conquering modern business challenges at a Fortune 100 company. We spoke with him about the future of securities and containers, the advice that his mother taught him as a child, his non-negotiables in business, and the leadership values that drive him forward.

We also heard from Sanjay Poonen at the 2019 Core Summit. You can watch the full video of Sanjay’s Lightning Talk on the 10 ways to cultivate customer-centricity below:

What is VMware driving towards as its North Star?

We have sought to focus on disruptive innovation and customer obsession. Aspiring towards those two goals has made us what we are today as a company.

For the former, if what we’re making is not ten times better than the alternative, it’s not innovative enough. In terms of our customer base, we rigorously measure NPS, and we’ve been fortunate enough to be among the top company net promoter score because of that.

''If what we’re making is not ten times better than the alternative, it’s not innovative enough'' - @spoonen, COO of @VMware Click To Tweet

Is there a specific mantra that you articulate to your team or organization?

I don’t know if we have a mantra, but our tagline has been, “Realize What’s Possible,” because it represents the spirit of innovation at VMware. We help people and customers realize what’s possible. The saying is behind most of the initiatives that drive our operations, but it has also worked wonders from a branding perspective.

What are the initiatives that you’re really excited about?

Recently, our agenda has been composed of cloud,  containers and security, because we just made some major announcements in those areas.

More specifically, we’re excited about two big acquisitions – CloudHealth and Carbon Black – that will culminate in a huge rebranding project around securities. I think this is noteworthy for the Boston economy, as those two companies are anchor points for the investments that we’ll continue to make in the Boston area.

''Those two companies (@cloudhealthtech & @vmw_carbonblack) are anchor points for the investments that we'll continue to make in the Boston area'' -@spoonen, COO of @VMware Click To Tweet

What’s keeping you up at night?

From the standpoint of delighting our customers, it’s making sure that they are highly satisfied and feel comfortable with the degree of innovation that we’re bringing to the table. Essentially, we want to see fewer escalations and higher customer satisfaction.

Internally, the most important thing for us is making sure we always have the best and brightest here. We want that talent to be happy with their jobs so they can help us innovative and stay ahead of the competition.

Thankfully, I feel like we’ve got a good team here, so I sleep very peacefully. We work hard, but it’s not a constant state of panic. If I ever felt that was the case, I know I either don’t have a good team or I haven’t planned well enough to be successful.

What are the leadership and operating principles that drive you forward?

For me, it all starts with servant leadership. I believe that the best leaders are the ones who realize it’s better to give than to receive, and it’s much better to develop new leaders than to be the center of attention.

''For me, it all starts with servant leadership. I believe that the best leaders are the ones who realize it's better to give than to receive, and it's much better to develop new leaders than to be the center of attention'' -… Click To Tweet

If we’re being honest, VMware should have been crushed by companies like Microsoft 20 years ago, but we’ve been that David and Goliath story, and I think leadership is born in those moments of challenge and crisis where you’re ultimately able to disrupt the space.

Additionally, I have a lot of respect for people who are crisp communicators and simplifiers of what their vision is – almost “Sesame Street simple” – because the more you can communicate a clear vision in both a written and verbal format, the more you can motivate your troops to see that vision through.

Is there a single piece of business advice that you’d give to entrepreneurs?

The best piece of advice I could give to aspiring business leaders comes from a great book that I read – The Presentation Secrets of Steve Jobs.

As executives, we have to present our stories often and to various audiences, and the most common way to do that – in the tech world at least – is with a slide show. But a slide show is not a story.  So, I encourage people to work on making a very simple story that’s not dependent on slides. Throw the presentation deck out the window – you don’t use slides to tell a story to your kids when you put them to bed at night, do you?

When you can tell a narrative without having to depend on these crutches that can hinder a story (like slide decks), you’re actually motivational to people. Great leaders need to be able to galvanize and get an audience to say, “I will.”

Steve Jobs did that probably better than anybody, whether on a keynote stage or in his staff meetings. There was a dynamism and a passion to what Steve did, and it’s not difficult to learn from what worked.

As you look back across your career, what would you attribute some of your biggest successes to?

I’ve been very fortunate to work for inspirational leaders, from Michael Dell – who is my current chairman – to Michael Skok. At different stages of my life, I was lucky to have people that I respected and was able to learn from. That’s been one of the most gratifying aspects of my career.

I believe that it all starts with people, and I’m glad I’ve had the opportunity to work for companies where people value innovation at scale. It’s because of those people that I’ve been allowed to be the entrepreneur that I am at heart but with the safety net of the big company.

If I look at my last three CEOs – Pat Gelsinger here, Bill McDermott at SAP, and John Thompson at Symantec – they have been three incredible CEOs, but they’re all different. I believed that if I could model my career based off of the best attributes of all three of them, I’d be a better leader as my career would flourish. I’d like to think that belief has turned into reality over the last few years.

What do you find is non-negotiable in the way you work?

One of the “epic values” we hold true to at VMware is integrity – specifically, how you treat people. One of the sights that is so disappointing to me is when people advance in their lives and careers and then treat people who are below them without dignity -kissing up and kicking down.

The attitude I have now is if someone looks down on people because of the number of degrees they have, the title of their job, or the bank balance they have, it just annoys the hell out of me.

Sanjay Poonen, what was the best piece of advice you’ve ever received?

The hero in my life is my mother, who taught me to be humble and hungry. She would remind me “two ears, one mouth.”

Basically, regardless of how much you’ve accomplished, you come home and you’re still Sanjay Poonen, the son, the husband, the father, the brother, so just be down to earth. She imprinted that on me, and if I could emulate her humility more, then I’m a better person.

What are you trying to achieve at VMware, and what are your bold predictions for the industry?

For us, part of being humble and hungry means that you realize where you are susceptible to incredible headwinds that will turn into a tailwind, because that can happen at any company.

Years ago, we were about $5 billion in revenue, and we had these two incredible headwinds coming at us: one was cloud, and one was containers.

We went through some hard times, because our initial strategy in cloud was wrong, so we had to dig deep and ask ourselves, “How do we transform the cloud strategy of this company?”

For us, it meant divesting our own cloud service and partnering with Amazon. That was a big step for us, but it turned out to be the right step, and it led to us having the public embrace and trust VMware.

More recently with containers, I think there was a lot of concern that we were going to be taken down, but what ended up happening was this open-source movement called Kubernetes. In the wake of this movement, we decided to come right out of the gates and say, “We’re going to be the leader in this initiative, along with a few others like Google, and we’re going to become one of the leading contributors and platforms for the container movement and the community around it.”

So that has now become another tailwind for us, as we’ve turned that headwind into agenda. Time will tell if the investment in cloud and containers have become a fully effective tailwind for us, but I think the cloud play has really starting to develop well for us in the last three years, and I believe a move like the one we made with Kubernetes expresses our deep desire for more, going back to the hunger my mom taught me about.

Digging what you heard from Sanjay Poonen? Dig into our No-Nonsense interview with Doug Merritt, CEO of Splunk! 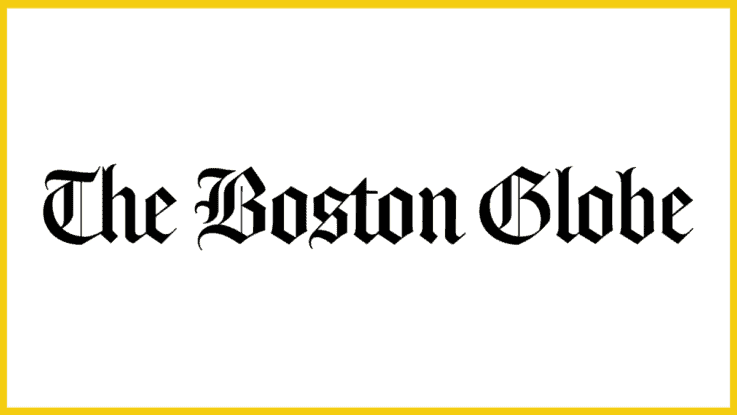 How would you rate your last work meeting?