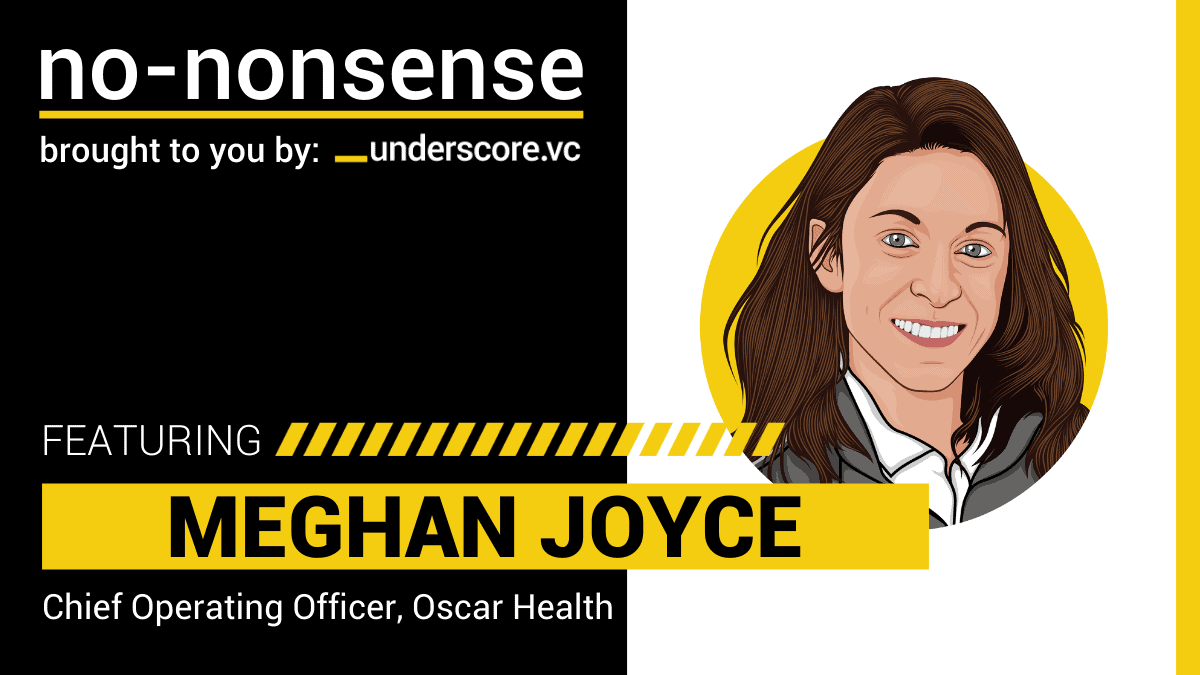 Following the 2019 Core Summit, we’re releasing “No-Nonsense,” a content series featuring no-nonsense advice on the not so obvious paths to success. Check back every Wednesday for the release of each interview with our 2019 Core Summit speakers! Today we connect with Meghan Joyce, COO of Oscar Health.

Meghan Joyce is the new COO for Oscar Health.  A former executive at Uber, Joyce holds her MBA from Harvard and has experience at Bain Capital, The Boston Beer Company, and the U.S. Treasury. She was also named “Most Disgustingly Happy” in high school. Despite her impressive list of commitments, Meghan still takes time to advocate for various social issues and encourages her employees to volunteer (while she too takes part).

Less than a month into her role at Oscar – a health insurance company whose mission is to center around the patient – Joyce sat down with us to talk about what she looks for in new opportunities, what she bases her employee promotions on, and what she wishes she hadn’t wasted time on early in her career. Meghan also joined us for the Underscore Core Summit, where she gave a lightning talk on building leadership at scale. Her full talk can be found in the video below!

Given your recent transition, what are the most important factors in your decision of where to work?

It’s important to me that any professional opportunity I consider has these three things:

Coming out of my last few experiences with that emphasis, I’ve learned that I love companies whose products are aiming to be disruptive in public facing and or regulated sectors. I think there are some fascinating challenges that come when you’re working to drive innovation to a diverse audience, with a diverse team, in a space where the stakes are high and we need to ensure that quality is upheld in a thoughtful way.

Is there a specific North Star that drives Oscar forward?

Oscar is bringing both tech and operations to bear to create a better member experience and improve the healthcare system. I think many of us have experienced a frustrating, confusing, expensive healthcare experience, where it just didn’t feel like our health insurer had our backs.

What Oscar’s trying to do is realign the incentive between the member, their provider, and Oscar – the health insurance company – to look towards data-driven, tech-enabled experiences.

When members are going through some of the most challenging experiences that they might have had in their life, we want the health insurance piece to be something that they don’t have to think about so that they can rest assured knowing Oscar is on their side and has their interests in mind.

What are some of the things that shaped you early on that you wished you could have avoided but, in hindsight, were pivotal in your learning?

One of the biggest misconceptions that I had about good leadership was that it looked, felt, and had to be done in a certain way. I’ve spent plenty of time trying to emulate what I saw other people doing that I really admired, and what I found was it wasn’t consistent with who I was or what I wanted to be.

When I actually peeled back the onion of what was so effective about those leaders that I was looking up to, I realized it was not how they were going about their work and their leadership, but rather the end that they were achieving in their businesses and how they were making people feel. It was always consistent with their own style, personality, and values.

When I got the insight and confidence to actually try that approach, that is when I was able to be the most effective and authentic leader for my teams.

Were there any situations that you found yourself wasting time on earlier on in your career that you would advise others to avoid?

In a high-growth organization, there’s always going to be overlapping job mandates, as well as people who are doing everything they can to make the business a better place and more successful.

What I eventually decided to do is to run towards the white space – aspects of the business that would drive real changes in how we’re performing, serving customers, and leading our team, but that nobody is tackling right now – and just start building and problem solving. That way, I avoid wasting time on the bickering of, “Well this is my job, and that’s my swim lane,” and can instead focus on moving the vision forward.

Candidly, the people that I promoted were the ones who focused on building the business – not defending their turf.

''The people that I promoted were the ones who focused on building the business – not defending their turf'' - Meghan Joyce, COO of @OscarHealth Click To Tweet

What is the best piece of advice you’ve ever received and who did it come from?

I got some great advice from my longtime boss at Uber, Rachel, around not waiting for a promotion to start doing the job that you want to be doing.

Oftentimes, especially in a high growth setting, the formal promotion path will lag the need for someone to step up and start doing. In doing so, I can actually give my manager leverage so that they can start thinking about my future in the business. As for managers, it’s about seeking opportunities for your direct reports to do that.

Those opportunities have been fun, exciting, challenging, and huge learning opportunities for me and the people that I’ve worked with, but they also were the experiences that my manager pointed to when I ultimately got promoted. When they were describing why I was promoted into a certain role, they would say something like, “You showed you could do it,” or, “You drove major business value by stepping out of your comfort zone and taking on something that was beyond your scope.”

Over the years, is there anything that has become a non-negotiable for you in business?

Yes – high integrity for myself and the people that I work alongside. I was raised with this value that I would never want to behave in a way that I wouldn’t be proud to see replayed, on the front page of a newspaper.

It’s not always easy, especially when other people around you are not necessarily acting in that way. But I have seen that commitment to integrity pay off every single time, and I’m so grateful to have built the confidence in that approach.

Meghan Joyce, What is keeping you up at night?

I think there is a compelling question around how we as business leaders are leading more proudly in our community. There have been some exciting examples of how corporations can step in and lead on critically important issues, from civil rights to climate change.

I see room to explore what that looks like even more, and business leaders have a responsibility to do right by their businesses and their customers. I think we are only scratching the surface on thinking about how business leaders speak to the community at large to ensure that the broader ecosystem that allows our companies to thrive stays healthy.

''I think we are only scratching the surface on thinking about how business leaders speak to the community at large to ensure that the broader ecosystem that allows our companies to thrive stays healthy'' -Meghan Joyce, COO of… Click To Tweet 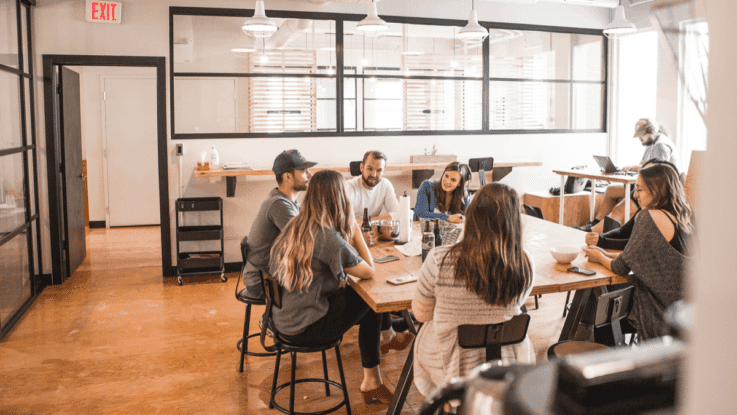 4 Questions Customer Success Leaders Ask Before Investing In Any Tech 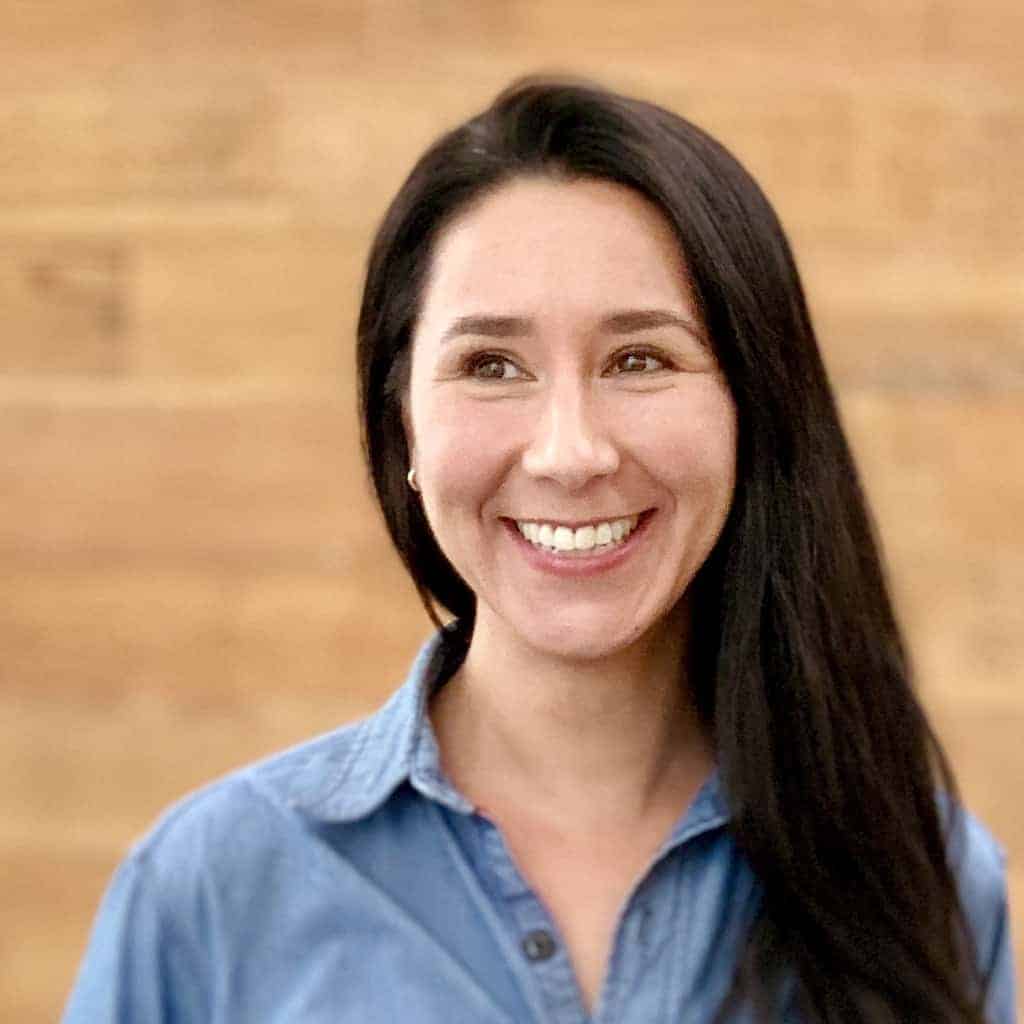